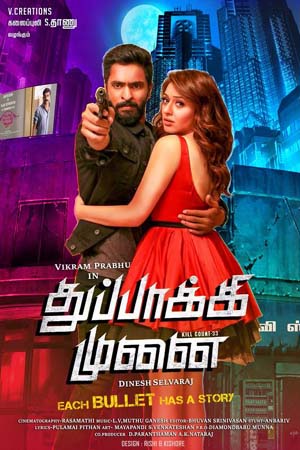 Bose gets an order from his senior officer and travels to Rameshwaram to investigate the brutal rape and murder of a 15-year-old girl named Manjalnayaki (Abhirami). Bose finds out that the local police has arrested a Bihari Maoist named Aazad (RJ Sha) in connection to the crime. They believe that Bose, an encounter specialist, should kill Aazad after making him confess to the crime. Uyya (M. S. Bhaskar), Manjal’s father, meets Bose and narrates his version of the story. He is the town’s barber and extends his services to Brahmaraja (Vela Ramamoorthy), a businessman who is feared and revered all over the country. On one such fateful day, when Uyya is providing his barber services to Brahmaraja at his house, Brahmaraja’s son and his friends lust after Manjal, who is playing in their premises. The next day, Uyya is thrown off the road from his bike when a car speeds past him. He sees a ribbon flying out of the window at the time. Soon, he finds that Manjal is missing, and a search team is dispatched, but they find only her corpse floating in the river. Uyya is devastated and tries to piece up information like the flying ribbon and a piece of Manjal’s science project found from the same car and realizes that Brahmaraja’s son and his friends are the perpetrators.